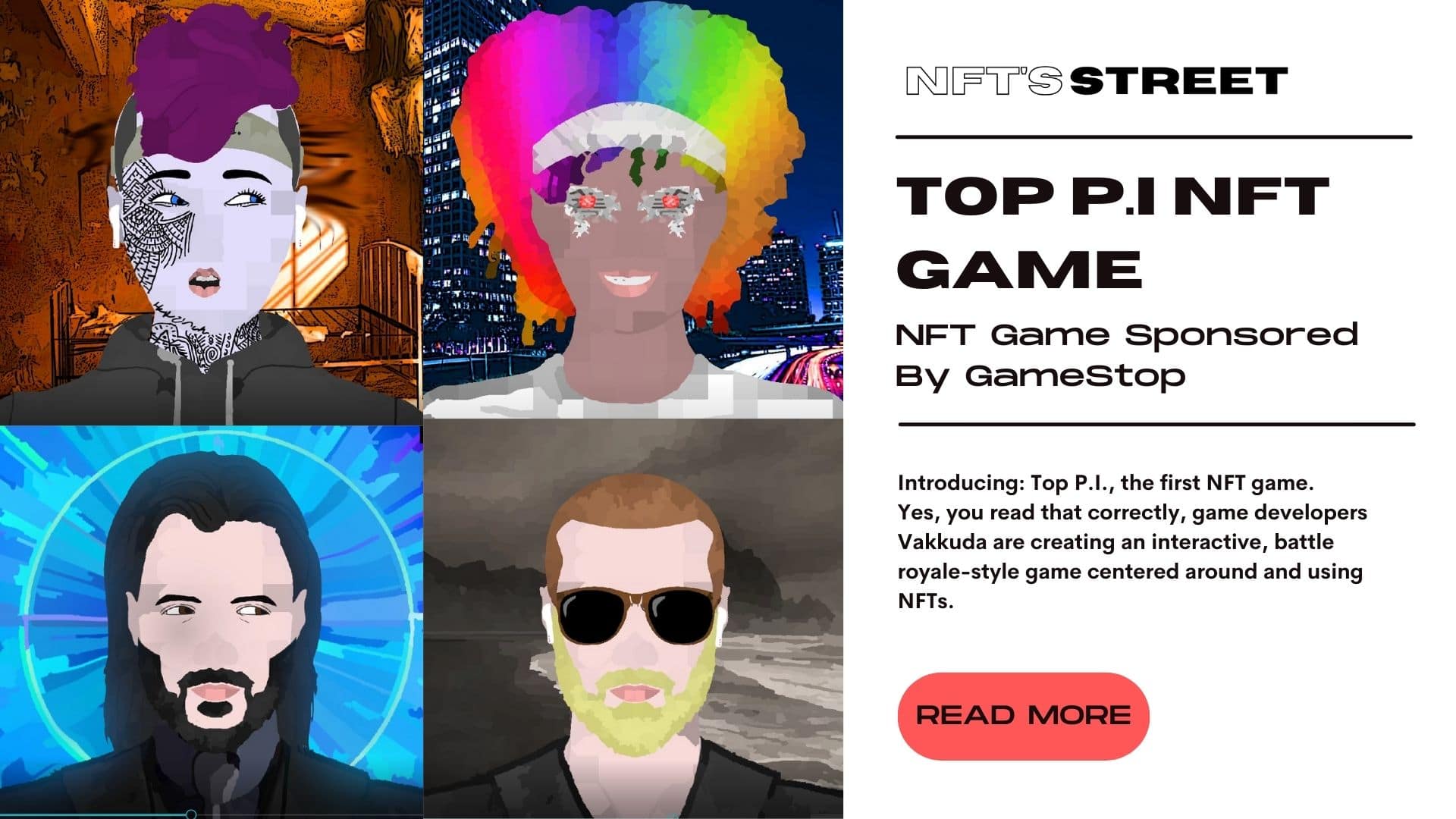 In the fast-moving world of crypto and NFT artwork, one of the questions that frequently seems to get raised is how far can NFT’s go? And will they hit a ceiling and top out? One company has decided to take NFTs and make them even more useful than decorative art or valuable to flip.

Described as a whodunnit murder mystery battle royale which is fun for all, Top P.I. follows the story of Dude Parker, an enigmatic billionaire with an established ancestral history, who lost his wife and son to gruesome murders years ago and has now started Top P.I. agency to pull together the best private investigators and seek justice against the criminals of the underworld.

As a player, you will first take a Top P.I. quiz, which if you pass and can prove your sleuthing skills will enable you to access a link to earn a mint, 1 of 2000. 500 tokens will be whitelisted and reserved to bypass the quiz. Once you have your NFT, you will gain access to the Top P.I. store, where you will be able to acquire utilities to help you in the game.

You will have to search the Top P.I. website, discord, Twitter, and youtube as well as the wider internet in order to gain clues and help you to solve the mystery of the game – each episode containing a full mystery, while the season is thought to have one overarching theme tying all the smaller mysteries together (though this detail has not yet been officially confirmed.

Top P.I., while badge traits courtesy of tokens will allow you to get certain clues before other players and increase the value and rarity of your NFT player.

Upgrades will change weekly, and according to game developer Vakkuda, the game is planned for 6 seasons with 6 episodes per season.

At the end of each episode, players who have not solved the series of clues will be eliminated, and unable to participate in the game until the start of the next season.

As players get disqualified each episode, Ethereum will get deposited into the winner’s pool, which will be split between the last 100 players in the game at the end of the season.

A leaderboard will be available on the game’s website to track progress and player numbers throughout the season, updating in real-time, alongside NFT listings, art release dates, and a counter for the amount of Ethereum currently held in the winner’s pool for the end of the season.

The roadmap for Top P.I. neatly lays this information out, as well as the more in-depth details of the additions and changes of each season.

With the beginning of each new season, an additional 1000 players will have the opportunity to join (or re-join) the game, meaning that season 2 will accept up to 3000 players, season 3 up to 4000, and so forth, ending with 7000 initial players by season 6.

The price of each NFT is set to increase from 0.05 eth each season as are the winnings in the pool for the final 100 players in each season. The number of utilities available in the Top P.I.

The store will also increase each season, but not at an equal rate to the number of players. As a result of all these increases, the competition will get fiercer and each season will be more difficult to complete than the previous one.

At the end of the 6th and final planned season, the developers have indicated that a surprise will be available to players and a new, different game will begin, though what exactly is currently undisclosed.

The core team working on Top P.I. includes game developers Vakkuda and Falcone.eth, founder and writer Rah, front end developer Kyoto, and Hazmat and Zeek, which are the game’s social media and marketing managers respectively. Falcone.eth also works as an artist and video editor, while Vakkuda is also a back-end developer and a smart contract developer.

The main artist for the NFTs and the game itself however is Juan Carlos Loaiza, a Venezuelan artist based in Argentina who specializes in graphic design.

This group of people has put together an intriguing game concept and plot summary, coupled with a detailed and artfully designed website to advertise the game, while the teasing of information on Twitter, Discord, and other social media sites has generated chatter amongst members of the community.

The developers are clear about their desire to change the nature of using NFTs and the landscape of the market completely, gaining new interest, investment, and support, while also creating an engaging and complex game to keep players thinking and invested in the story. It just so happens that in this game, you earn prizes with real value.

How to Get the TOP P.I NFT?

You can get a TOP P.I. NFT by taking the top P.I. Quiz to see if you are sleuthy enough. Once you pass you will be granted a mint link where you have earned a mint, 1 of 2000. We will reserve 500 tokens to be whitelisted to bypass the quiz.

Once you procure your Top P.I. NFT. The Top P.I. Store will open up where you can acquire a limited amount of utilities.

Badge traits will be able to get certain clues first. Utilities can be equipped to further upgrade your Top P.I. Upgrades will be updated every week. Then it’s game on. Players numbers will dwindle with each episode.

The winners and losers will both be announced after each episode. The top 100 winners will split an Ethereum Winners’ Pool (50% of mint).

APPLY TO BE A TOP P.I
JOIN THE TOP P.I NFT COMMUNITY
In this article:Featured, nft, nft projects