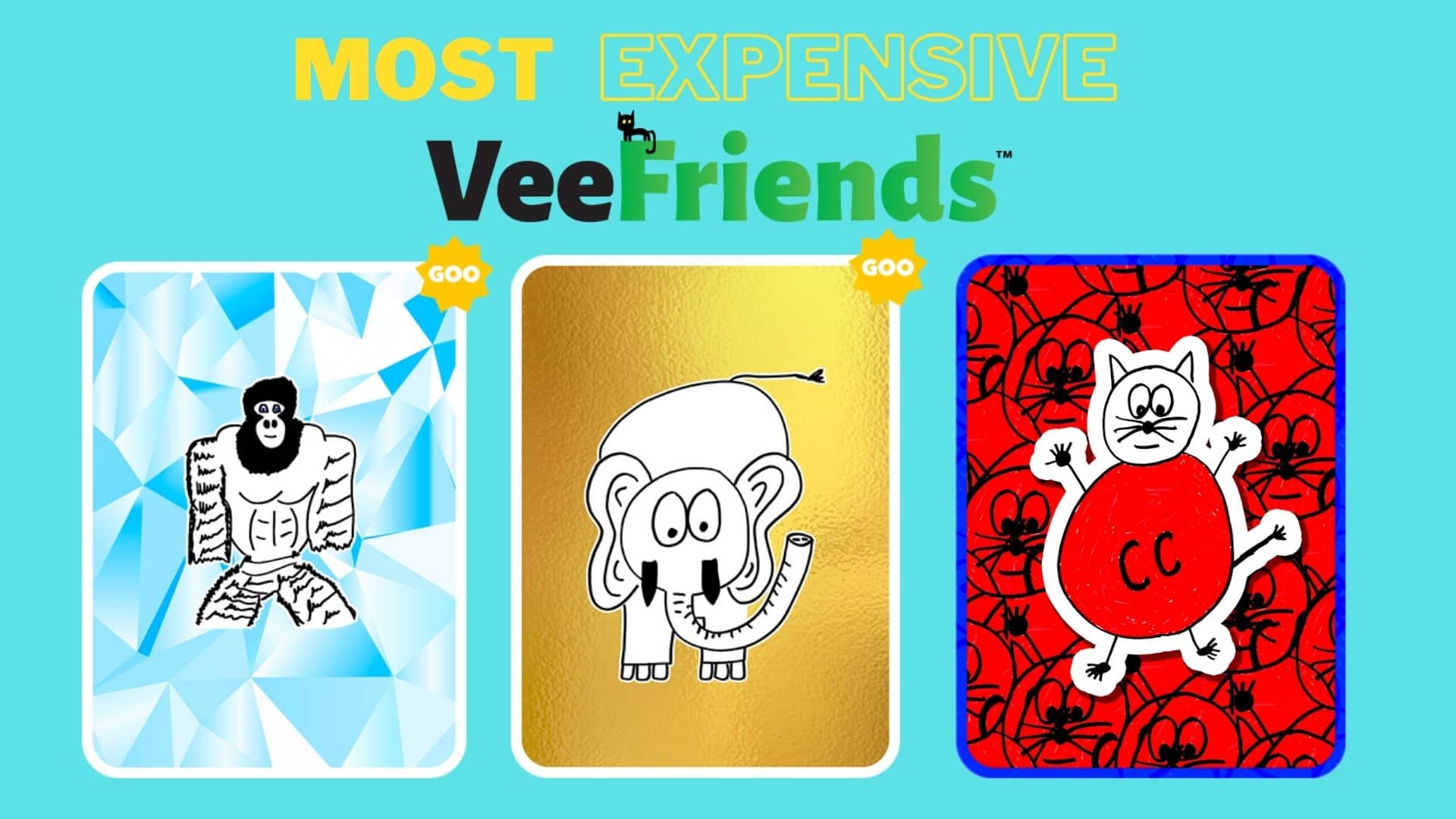 NFT enthusiasts can guess the originator of this project with just a glance at the name. it is the well-known Gary Vaynerchuk or GaryVee. When it comes to NFTs he is probably the best orator. He encourages people to get into the future of the merging of the virtual and real world. Now he’s expanding his talents towards the NFT space by launching his own NFT collections.

Getting onto the Veefriends NFT collection, this collection’s first launch comprises 10,255 Veefriends NFTs. Through this project, he is taking advantage of the functionalities of NFTs and moving towards forming a community based on his business and creative ideas. The NFTs of this collection personate human qualities that Gary Vee believes will help create a community with positive vibes and bring about fruitful consequences.

They are also generated with a combination of different varieties of traits or properties bifurcating some into being rarer than the others. The holders of Veefriends NFT will also have access to the Vee Con.

Vee Con is a series of events focusing on creative and imaginative concepts, entrepreneurship, business, and so on. Everything that surrounds this NFT collection centers collaborative development of the Veefriends holders and adds all the more reason to the growing aficionados towards this project.

From here on there are listed Veefriends NFTs that have been sold for much higher prices.

This NFT portrays empathy that too as an elephant was sold for 130 Ethereum or $489,312 making it the highest-priced sale from this collection. JCapGenesis purchased this from AidanTag on 4th January 2022 and was later transferred to GenesysFund2 on 11th January 2022.

The current holder GenesysFund2 has quite an impressive set of NFTs collected such as alien fren, VOX Collectibles, Mirandus, and so on. The Empathy Elephant is adorned by many traits such as G.O.O and Safari property, Spectacular rarity, Gold spectacular, and many more properties that are very rare. The set of rare properties that it possesses also adds up to make its value quite high. The owner has not put this Elephant up for sale.

The watchful and attentive embarking ape also accounts for the highest Veefriends sale. This ape was sold for 105 Ethereum or $333,807 on 8th August 2021. This was sold by the creator of this project Gary Vee to WuTangClan.

The Alert Ape has rare traits and properties which coincides with why this Ape sold for a high price. It has a Diamond spectacular, Jungle property, Spectacular rarity, comes from mammal category, and many more.

The holder of this NFT along with the Veefriends has several astonishing NFTs such as Bored Apes, Cryptopunks, Creature World, and many more. The owner has put up this Veefriends NFT for sale at the price of 350 Ethereum.

This Cat bears the extremely rare courtside adjective as it is the only one that has it. So, judging by its rare adjective it was obviously sold for a high price. It was sold for 100 Ethereum or $270,019.

This was sold on 5th August 2021 by j1mmy_vault to DANNY and was transferred to DANNYSECURE the following day. This Cat with a rare adjective has other traits and properties as well.

Such as the Mammal category, In-Person Access property, and so on. DANNYSECURE the owner owns spectacular NFTs such as CryptoPunks, MakersPlace, Hashmasks, and many more.

The Alien with the human quality that is useful most of the time was sold for a high price. The Adaptable Alien was sold for 100 Ethereum or $127,000 on 8th August 2021.

This was sold by Gary Vee to WuTangClan and both are familiar names. WuTangClan also bought the Alert Ape from the same seller Gary Vee.

The Adaptable Alien is adorned by rare traits and properties such as Spectacular rarity, G.O.O and 1 of 1 Art property, and many more.

This thoughtful creature certainly caught itself being sold at a very high price. This was sold for 90 Ethereum or $303,480 on 11th January 2022. Maazavault sold this Veefriend to logz.

Logz the owner of the Harpik has quite an immaculate collection of NFTs including MoonCats, CryptoPunks, ON1 Force, and many more.

The Harpik has traits and properties such as Hologram spectacular, Spectacular rarity, Admission group, Creature category, and many more traits that are rare and a small percentage of the Veefriends have these traits. This Veefriend has not been put for sale by the owner.

You might be getting confused as to the resemblance it holds with the previous one but it has one different trait and it is clearly visible. This Thoughtful Harpik was sold for 85 Ethereum or $272,000 on 8th January 2022.

This was purchased by Lefko from Mitchell-360. This Harpik has similar traits and properties to the previous Harpik the only difference is this one has Bubble Gum spectacular.

Lefko has collected several magnificent NFTs including CryptoPunks, Doodles, World of Women, and many more. This Harpik is not available for sale at the moment.

This Veefriend is carrying a trait that is probably inspiring several holders. This Entrepreneur Elf was sold for 80 Ethereum or $294,482 on 8th August 2021.

The NFT collector who bought this has been mentioned before and this is the third time that the name is popping up. You guessed it right, it’s WuTangClan. The collector seems to be a very enthusiastic collector.

The Entrepreneur Elf has a total of 12 traits some of which are Elf animal, Lava spectacular, Spectacular rarity, etc. This Elf has not been put up for sale by the owner.

This “Diamonds Hands” Hen bears rare traits and properties such as Hen animal, Diamond spectacular, Farm Animals property, Spectacular rarity, and many more. The owner of this Hen kalish has a collection of immaculate NFTs such as CryptoPunks, Doodles, Bored Ape, and so on.

The owner has put up the “Diamond Hands” Hen for sale at the price of 369.95 Ethereum.

The panda with the trait that is most important in the NFT and crypto space. The Patient Panda was sold for 70 Ethereum or $164,273.

This was sold by NFTB1 to kalish. Here comes kalish again who has also purchased the “Diamond Hands” Hen.

The Patient Panda holds traits and properties such as Jungle property, Diamond spectacular, Mammal category, Spectacular rarity, and many more. The Panda has been put up for sale by the owner for 690.42 Ethereum.

The Aspiring Alpaca is here to shower some hopes towards the holders. The Alpaca was sold for 60 Ethereum or $127,912. This was purchased by StumpyJoe83 from Haymakers.

Then it went on a long process of getting transferred and finally got transferred to StumpyJoe83 again on 5th January 2022.

This Alpaca is made up of traits and properties such as Farm Animals property, Spectacular rarity, Bubble Gum Spectacular, and many more. The owner StumpyJoe83 has collected many Veefriends NFTs. The Alpaca is up for sale at the price of 65.55 Ethereum.

Gary Vee came up and released this NFT project with a very logical and innovative aim. Through this project, he established a community that is filled with inventive and creative holders.

Moreover, there are Vee Con events that will be lit and inspiring. The NFTs themselves represent the qualities of humans that we implement in life when going for the achievement of certain aims. This is a unique and interesting project which will probably receive higher recognition as time goes on.