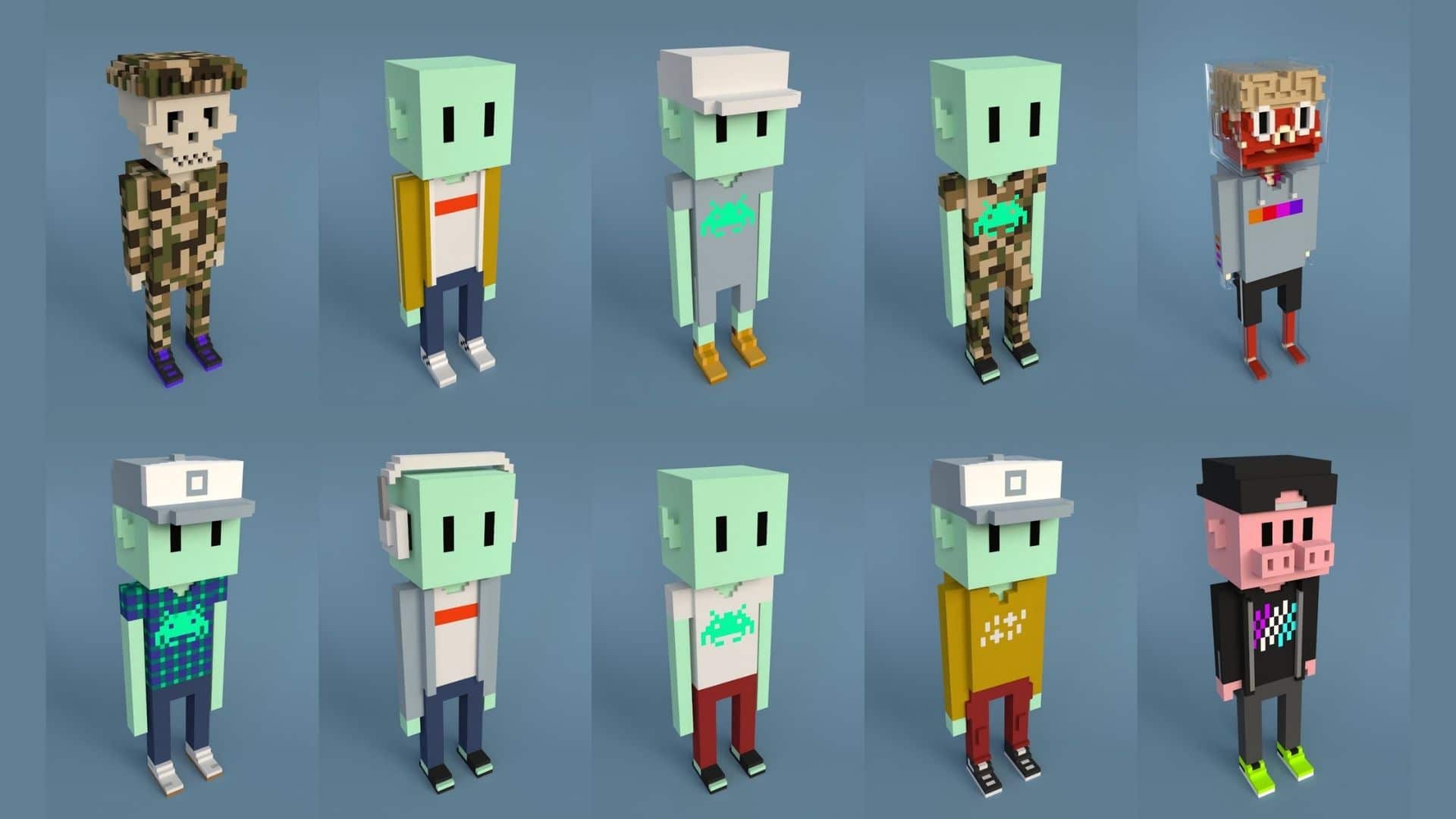 Meebits is a project developed by the developers of CryptoPunks. Larva Labs launched the project around May of 2021 and just like the CryptoPunks they have turned the heads of several collectors and enthusiasts. The project is composed of 20,000 voxel 3D characters fabricated by a custom generative algorithm. They are ERC-721 that live on the Ethereum blockchain.

With the Voxel character, the holders also get the T-pose OBJ file which they can import to any 3D modeling and animation software. This is an impressive utility as the holders can animate their voxel characters the way they want bringing their ideas to life. Along with this comes the utility of living as your character as they can be used as avatars in the Metaverse.

They also have generated a DAO identified as MeebitsDAO giving itself the assurance of a long-term plan. All the funds of DAO will go towards the development of the project and purchasing lands on the Metaverse.

With all this, there is no reason to doubt the future of this project. Holders are sure to have a thrilling experience. No wonder the collectibles of this project have risen so high in value. Below is listed the Meebits Vox characters that have sold for high prices.

With some sort of abnormality in its face, with three eyes and two noses, this pig Vox character was sold for an unbelievable price. This one was sold for 1000 Ethereum or $2.1 million. This was sold by stazie_hacked to 005E9E on 9th July 2021.

This Vox character is the most magnificent collectible in the collection of 005E9E. This Meebits #17522 is generated by the combination of 9 traits and properties such as Bald hairstyle, Black hat color, Regular Pants, and many more.

The owner has not made this Meebit available for sale. Although it has a bid of 7.53 Ethereum placed for it.

This Meebits has a very thrilling and cool appearance, the fact that it holds high value is not surprising. This Vox character was sold for 700 Ethereum or $2.6 million.

These Meebits have traits and properties such as Athletic Shorts, No Shoes, Dissected type, Bald hairstyle, and many more. This Meebits has not been put up for sale and it has a bid of 40 Ethereum placed for it.

The Meebits #18574 has a somewhat indifferent appearance and is a visitor-type Vox character. This visitor Vox found itself being sold for a price of 469 Ethereum or $1.25 million.

This was sold by Odysseus to D049B3 on 4th August 2021. This Meebits #18574 was generated by a combination of a myriad of traits and properties. Some of them are Trucker Cap hat, Gray hat color, Classic shoes, Visitor type and many more. The owner D049B3 along with the Meebits has several CryptoPunks collected.

This Meebits has not been put for sale by the owner but there is a bid of 35 Ethereum on it.

Close to the previous one, this one is also a Visitor type Meebits. This one was sold for a price of 420 Ethereum or $1.4 million. The collector who bought it for this high price is Punk4023 on 4th May 2021.

This Vox character was later transferred to 0845FC on 8th October 2021. As you already know this Meebits is a Visitor type, the other traits, and properties that adorn this Vox character are Cargo Pants, Camo pants color, Slides as footwear, Invader Tee shirt, and many more.

The owner of this Meebits 0845FC has collected over 78 NFTs and has magnificent ones life several CryptoPunks, Bored Apes, Meebits, and many more. The Meebits #8598 is not available for purchase although there is an offer of 35 Ethereum for it.

This is the third visitor type Meebits that we have come across in this list. This Vox character was sold for a price of 400 Ethereum or $1.3 million on 4th May 2021.

This one was purchased by krybharat and was later transferred to krybharat_vault. The Meebits #2948 is a visitor-type Vox character and has several other traits and properties.

Some of them are Cap hat, Bald hairstyle, Gray pants color, Workboots shoes, and many more. The owner krybharat_vault has many other NFTs collected such as CryptoPunks, Cryotoadz, and many more.

Visitor Meebits is probably the one that holds the most value in the Meebits project. This one is also a visitor Meebits and was sold for a price of 390 Ethereum or $1.3 million.

This was purchased by illestrater from C6C7E6 on 4th May 2021. The Meebits #776 has been generated by the combination of traits and properties such as Logo Tee shirt, Slides, Denim pant color, Bald hairstyle, Headphones, and more.

The owner of this Meebits illestrater has fascinating NFTs collected such as Mutant Apes, Mutant Serum, other Meebits, and many more. This is also not up for sale but has a bid of 35 Ethereum for it.

This creepy-looking Meebits with an intimidating ensemble was sold for 321 Ethereum or $1.02 million on 30th August 2021. This was bought by MZM_MONSTER-CAPITAL from sovpunk.

The owner MZM_MONSTER has collected several Meebits, CryptoPunks, and many other NFTs. The Meebits #3595 is generated through traits and properties such as Wool Hat, Bald hairstyle, Regular Pants, Hoodie Shirt, Purple shoe color, and many more. The Vox character has been put up for sale by the owner for a price of 988.88 Ethereum.

The collector who purchased this is zoomc. The traits and properties that adorn this Visitor Meebits are Bald hairstyles, Athletic Jacket, Logo Tee, Black Shoes Color, and more.

The owner zoomc owns several Meebits and CryptoPunks. The Meebits #19775 has not been put up for sale. Although it has an offer of 35 Ethereum.

The traits and properties that make up this Meebits are Bald hairstyle, Trucker Cap, Hoodie, Cargo Pants, and more. The owner of this Meebits has quite a fascinating collection which includes CryptoPunks, Meebits, Cryptoadz and many more. This Meebits is not available for purchase but it has an offer of 35 Ethereum.

The number ten most expensive Meebits is too held by a Visitor Meebits. This Meebits was sold for 275 Ethereum or $1.08 million.

This was purchased by zoomc from only_eth. This is a familiar collector who has also bought Meebits #19775. The Mebbits #19480 is generated by a combination of traits and properties such as Bald hairstyle, White Shirt Color, Slides, Invader Tee, and many more. This Meebits is also not up for sale but has a bid of 35 Ethereum.

It comes as a fascination as to all the top sales of Meebits NFTs is on the line of not even thousands but million. All these high values come around to the utilities that the Meebits hold. The holders are able to animate their own NFTs and can also live in the Metaverse as their NFTs.

A lot is riding in this project and there are more to be launched in the future. Furthermore, with the build-up of DAO, the project has ensured that they are here for the long-term and not just for a short hype. Meebits is definitely a notable NFT project.