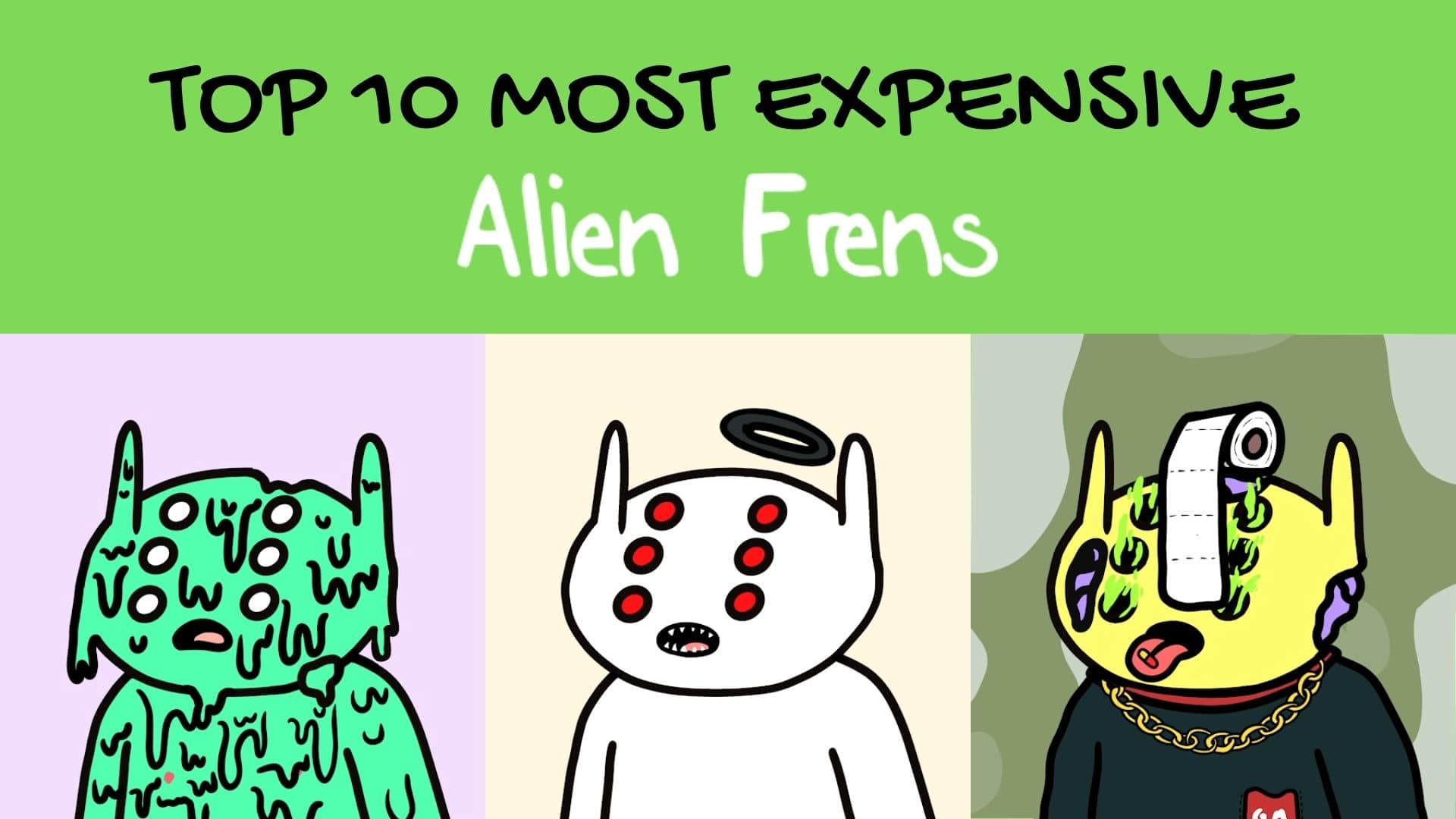 Alien frens is an NFT project that invites enthusiasts to build up a lifelong friendship with 10,000 frens. It has set its eyes on building the most wholesome community and initiated a friendly ambiance for its holders. The collection of 10,000 NFTs is randomly generated that live on the Ethereum blockchain.

Besides creating a wholesome community, the project also has a lot of forthcoming exciting events and things that the holders are expecting very dearly. Some of these are exclusive merchandise, comix books, in real-life events, the exclusive $FRENS Token which serves as a cool pfp for social media platforms.

This project was launched on 20th December 2021 and by now its floor price has reached 2.12 Ethereum with over 15.5K Ethereum volume traded. These adorable aliens outperformed most of the top NFT projects and have secured an influential position in the minds of enthusiasts.

Here is a list of the alien frens that were sold for lofty price tags.

The alien fren with electricity rounding up around him, sold for an electrifying price. This NFT was sold for 40.69 Ethereum which is $97,514.52 on 17th January.

This was sold by 50PoundGoldfish to iloveburgers. The owner iloveburgers is an exceptional collector with over 518 NFTs collected.

Alien fren #4103 has one trait that is Electric and this is the only one with this trait. So, this means that this one is extremely rare. The owner has not put it up for sale, maybe the owner is a rare NFT collector.

This one is quite fascinating as it looks very simple or maybe that is the reason that this sold for a high price. This alien fren was sold for 35 Ethereum which is $84,265.33. shanelavalette sold this alien fren to Plum on 13th January.

The owner of this NFT Plum has collected over 1.4K NFTs and features NFTs such as CryptoPunk, Doodles, Pudgy Penguins, and many more. This alien fren #7603 also has a very rare trait, Monochrome and this is the only one that has this trait. This has not been put up for sale by the owner.

This was purchased by ilovetuggies from Shadows-eth on 9th January. ilovetuggies has collected over 127 NFTs and the collection is flooded by Full Send Metacard NFTs.

The alien fren #125 comes with a pack of properties, 6 properties to be exact. It has an Orange background, Zombie OLU body, and only 10 of the alien frens have this trait, an Office Hipster attire, Ninja Blue, Dazed eyes, and Meh mouth.

This alien fren has been put up for sale by the owner for 100 Ethereum.

The cold as ice and infected by worm alien fren saw a high price when being sold. The alien fren #7711 was sold for 25 Ethereum which is $60,190.46. This was sold by Bajirao to Gingging2 on 9th January.

Gingging2 has spectacular NFTs collected and among them are 4 alien frens, a CryptoPunk, and many more.

The alien fren #7711 comes with 6 properties that are very rare. It has a Pink background, Zombie Xenos body which only 10 of the alien frens possess, head submerged in an Ice Cube and only 1 percent of the alien frens have this trait, Goo mouth, Dark Jacket and Gummy Worms eyes. This alien fren is available for sale at the price of 33 Ethereum.

coasthawk bought this alien fren from RexaSaurusVault on December 27th 2021. coasthawk has collected over 400 NFTs and has several alien frens, cryptomories, and much more cool NFTs.

The alien fren #668 has a very rare trait Albino and this is the only alien fren that possesses this trait. This alien fren is available for purchase at the price of 100 Ethereum.

The owner jf has collected 278 NFTs and is a very enthusiastic NFT collector. Jf has magnificent NFTs collected. The alien fren #9720 comprises of 6 properties, a Blue Camo background, Femi Body, Bonzai Hat, Aw Man mouth, Glasses, and Armband attire. This alien fren has not been put up for sale by the owner.

This is another alien fren with zombie features and a headband. This alien fren was sold for 15 Ethereum or $36,218.33.

This was purchased by TeamNFTone from 50PoundGoldfish on 16th January. On 24th January it was transferred to bananarama123.

The owner bananarama has collected 44 NFTs and among them are Cryptoadz, a Bored Ape Kennel Club, Phantabear, and many more. The alien fren #3078 is adorned by traits such as a Mint background, Zombie Femi body which is rare, Baby Tooth mouth, Fren eyes, Ninja Yellow, and Overalls Blue Yellow attire. This alien fren has not been put up for sale by the owner.

This alien fren is covered in some sort of gooey stuff and the alien itself seems to be surprised. This alien fren was sold for 15 Ethereum or $36,218.33. JCapGenesys purchased this NFT from fren-721 on December 26th 2021.

Later on, January 11th it was transferred to GenesysFund2. The owner GenesysFund2 has collected over 44 NFTs and mostly owns VOX Collectibles. The alien fren #6373 has a rare trait called Melted. This has not been put up for sale by the owner.

Here comes another zombie alien fren that has worn a Pilot hat. This alien fren was sold for 15 Ethereum or $36,218.33. This was sold by yeecatzl to coasthawk on 9th January.

A collector mentioned before has also purchased alien fren #668. With over 400 NFTs collected there are along with the alien frens, a Bored Ape NFT, cryptomories, and many more.

The alien fren #5096 has 6 traits, they are Baby Blue background, Armband clothes, Dazed eyes, Pilot hat, Meh mouth, and a Zombie Femi body. All these traits are pretty rare. This alien fren is not available for sale.

This is also a zombie alien that is peculiarly cool with a pill in the tongue and toilet paper in the head. This alien fren was sold for 14.99 Ethereum or $36,074.56. This was sold by AEE254 to Sputnik31 on 4th January.

The owner Sputnik31 has collected 378 NFTs and along with the alien frens owns Bored Apes, Mutant Apes, Cool Cats, and many more. The alien fren #7562 has altogether 6 traits and they are rare ones. It has a Green camo background, Zombie Femi body, Drugz mouth, Ghostie Eyes, Tee Pee hat, and Dark Chain Sweater.

The alien fren NFTs have been sold for high prices. In a very short period of time, it saw the upsurge of the prices on which it was sold. People are willing to pay so much as this is a community-focused project and has several exciting things that are yet to be launched. The community of this project is wholesome and the literal motive of this project is that everyone becomes friends with each other. So this is a very efficient collection of NFTs and will evolve to become one of the most friendly NFT communities in the future.