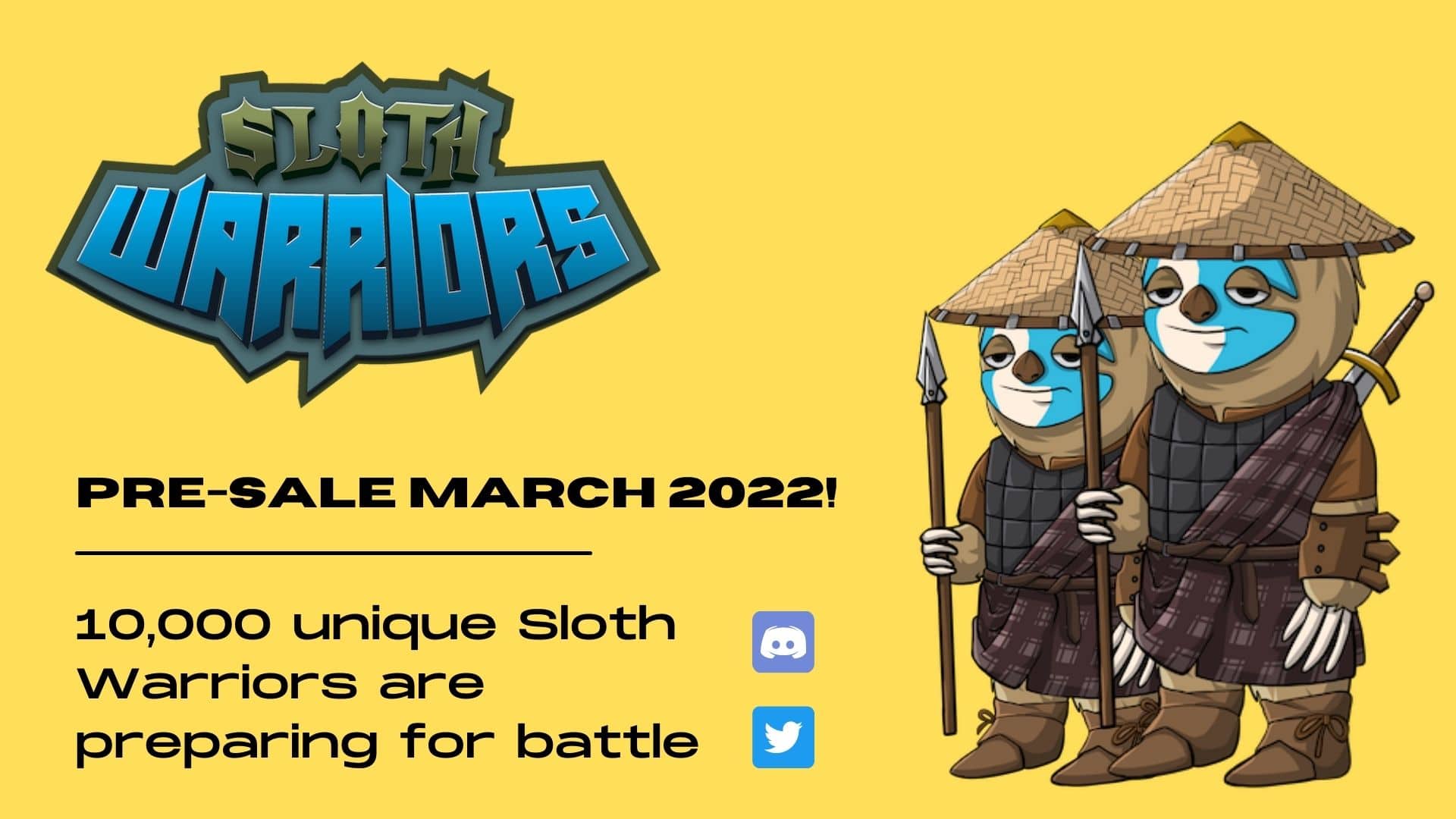 Raising awareness of endangered species and fostering creativity within its community, the Sloth Warriors NFT project is a collection of 10,000 NFTS on the Ethereum blockchain, ready for pre-sale minting in March 2022.

Kitted up and ready to battle, the collection is comprised of cute sloth characters in historical warrior garb. Aside from accessories like Viking helmets, Chinese plate armor, and “Braveheart” facepaint, you’ll also see a fun side to the Sloth Warriors, with 30+ traits such as zen expressions and novelty coffee mugs also possible in the randomly generated token collection.

The aim of the project is three-fold:

The team has other “Warrior” NFT projects in the pipeline looking to highlight similarly endangered species after the sloth project is up and running.

The team behind Sloth Warriors

Behind the project are the project founder, Justin, as well as a developer, artist, and creative writer.

Justin, the founder of the project who also goes by his sloth-name “Sloth Wallace” is a gamer, musician, and of course an animal lover. He has been involved in the crypto scene for a number of years now and has an established background in tech.

A veteran of the military, Justin has come to see the warrior within both people and animals as they deal with everyday experiences. Whether it’s survival, dealing with negativity and mental illnesses, or simply finding acceptance, Justin wanted to create a project that highlights the battles we each face daily.

Finding a parallel in the plight of endangered species, Justin and his passionate team created the project to raise awareness and celebrate our individuality at the same time.

One of the most exciting aspects of the project is its drawing from the community’s combined creativity. Launched in phase 3 of the roadmap, the Warriors Story Submission Program seeks to have members of the community write stories, produce artwork, and establish lore for their warriors which will become integrated into future videos, NFT projects, and video games.

The aim of this is to support creativity and encourage a sense of ownership for NFT holders. In building rich, collaborative lore, too, the project becomes fleshed out, increasing the value for all involved.

The project plans on undertaking many giveaways in the future, giving back to the community for its support. This will involve community members winning real-life collectibles such as Warrior-themed coffee mugs, shirts, bobbleheads, and much more yet to be announced.

The project also plans on expanding the Warriors universe by launching future NFT projects to raise awareness for other endangered species. The first lined up is the “Bear Warriors” project that will launch shortly after the Sloth Warriors NFT project is established. These tokens will raise money for organizations involved in preserving bear populations that are at risk, in a similar way to the Sloth Warriors project.

Upon completion of phase 3 of their roadmap, the team is also looking to use the community lore to develop a videogame that has at its core the Warriors characters and philosophy. While this is dependent on the success of the Sloth Warriors project, the team is optimistic for the future.

In its early phase, the Sloth Warriors project is busy fostering its community through the launch of its website and engagement with investors and interested parties through Twitter and Discord. Growing this community will also involve sharing Sloth Warriors with various partners.

Following this, the project will begin uploading the generative artwork to the blockchain ready for minting as well as preparing the various marketplaces for the collection.

The final stage of phase 1 will be the launch of the Sloth Warriors Website 2.0.

The second phase involves the pre-sale and public minting of the collection. This will be available through the website and is expected in March 2022. This will be accompanied by the launch of the charity wallet, which will be used to fund the project’s conservation donations.

This phase also sees the project begin funding the future of the project where proceeds are reinvested back into the community in the form of partnerships and development costs in expanding the Warrior NFT series.

Upon a successful launch of the Sloth Warriors collection, the team intends to expand the Warriors series with the reveal of a new accompanying project called “Bear Warriors.” This will be a companion project to Sloth Warriors and help raise funds for endangered bear species, as this project does for sloths.

This stage also sees a focus on community engagement through the Warrior Writer Submission program, giveaways, and the first news on the development of a Warrior’s video game.

With a sound plan, realistic goals, and a philanthropic edge, the Sloth Warriors project is gaining momentum in the community. While the project is still in its infancy, the team are confident in their roadmap and are looking forward to a successful launch.