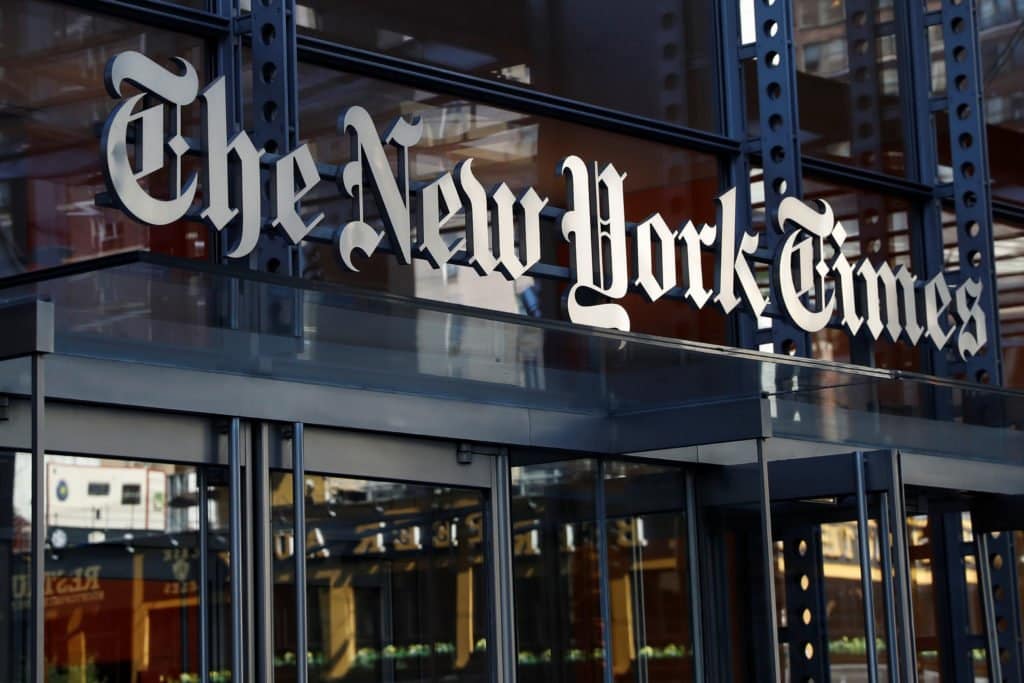 The New York Times has also dived into the recent game of the crypto currencies – Non-fungible Tokens, or NFTs – selling their own “the first-ever article in around 170 years of history of The Times to get distributed as a Non-Fungible Token” – and it is sold for an amount more than half a million dollars –$560,000 USD to be exact. While it is not the first news brand to be selling one of the latest digital tokens, it certainly has become one of the most successful ones in the game.

The auction for the non-fungible token was declared in the column by Kevin Roose, acting as both the explainer for NFT and a sales pitch as a reason for why people would get the article. The author would be able to discuss the procedure about minting the NFT and then putting it up for the auction.

The NYT made a NFT!

My new column is about NFTs, and I also turned the column into a NFT and put it up for auction on @withFND, with proceeds going to charity.

Just like other branded non-fungible tokens, the New York Times added some additions for sweetening the whole deal. Of course, there is also a PNG of the column which the NFT points towards, but the buyer would also be sending a voice memo as a note of congratulations from The Daily podcast host and get featured in a follow-up column regarding the sale of the NFT.

Buy This Column on the Blockchain!

Why can’t a journalist join the NFT party, too?

Funds Will be Going to Charity

As with a lot of branded NFTs, the whole proceedings of the sale would be going to a charity which is actually great. This is because it is a huge amount of funds – funds that are enough to get two millennia worth of the New York Times digital subscriptions. The publication has not yet said if or how it would decide to offset the carbon emission coming from the sale.

When asked to leave a comment on the sale, Roose only came up with a “wow.” The columnist for New York Times sold one of his articles for 563,000 USD, which accounts for more than half a million. It is the latest example of the amazement that surrounds the latest digital Crypto Currency that the collectors are going to snap up soon.

Bringing the Art of Journalism to NFTs

The article is titled “Buy This Column on the Blockchain” and is aimed at getting the market to the types of the items it would be selling in the form of an NFT. An NFT is a kind of digital object, like a drawing, photo, video, or a piece of music, with an authenticity certification created through blockchain technology.

The authentication through a network of computers is evaluated as inviolable. The virtual object that is actually a computer file might be exchanged or get sold through its certificate. The Non-fungible Tokens have become quite famous in the past half a year, as enthusiasts turn their heads to the digital market in the pandemic.

Previously this week, the first message that got posted on Twitter got sold for 2.9 million USD when its sender, Jack Dorsey, the Twitter co-founder, and chief, accepted the winning bid at the digital auction.

Also, we got to see the famous NFT got sold by the American artist Beeple for a surprising 69.3 million USD at Christie’s. That NFT set a new world record which is yet to beat. When it comes to the NFT game, journalism has also joined the league. At the end of the daily auction period, a collector who calls himself with the name Farzin got the article with 350 Ethereum, which is a major crypto currency worth over half a million USD.

After the sales, with the 15 percent reduction in the fee by the Foundation platform through which the auction was settled, the remaining amount would go to the charities that were supported by the news organization The New York Times.

As you can see, the future of NFTs is bright – we see its applications running far in the horizons of crypto currencies in the tech world – with bitcoin success, NFTs are here to stay for long, the concept of ownership is now changed for good, and with more and more people grabbing the concept of