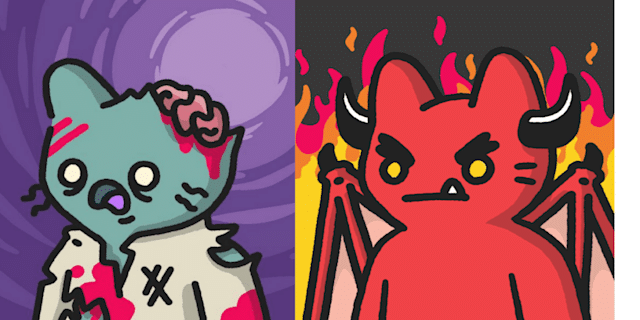 The Cool Cats NFT project is a collection of 9,999 randomly generated or stylistically curated NFTs. The collection is based on the original character “bluecat” created by one of the developers and artists, the catoonist, and all portray a cartoon cat in different clothes and disguises. With over 300,000 combinations, the NFTs are all truly unique, with each given a “coolness” score between 3 and 10 (no cat is uncool enough to get a 2 or less).

The project has seen tremendous growth since its launch in July 2021 and is considered by many to be a “blue-chip” NFTs. To date, the project has amassed nearly $200 million in sales volume, generating over 33,000 sales. As well as holding an asset that is likely to increase in value, owners of Cool Cats also enjoy other perks such as free $MILK tokens, raffles and airdrops, as well as access to the planned breeding program. With an exciting roadmap planned for 2022 and beyond, Cool Cat NFTs are becoming increasingly valuable.

Here then are the top 10 most expensive cool cats NFTs ever sold.

Selling in October 2021, #3419 is one of only 2% of Cool Cats that have what’s known as a “double face.” Sporting a shocked Pikachu expression is perhaps appropriate given how valuable this NFT became in such a short time. Making this Cool Cat exceptionally rare is its “Cowboy Brown” outfit, something only 57 other Cats have. Combined with its Exotic “coolness” score, this NFT is one of the most desirable in the collection.

Giving this NFT its high value is its cat-shaped TV head, with the error code “404”, typically used to mean “not found.”  While the NFT is also classed as an Exotic Cat, it’s this “tvface 404” attribute that’s got people willing to pay big money to own it. Only 20 other Cool Cats have this head, and when combined with its other rare characteristics (including its Sgt. Pepper style shirt) #7310 becomes one of the most distinctive out.

Featuring both the “Costume Frog” hat and shirt, in combination with the “Zombie” face, #8875 is a mixture of cute and grim. The token last sold for over $300,000 and is not the only Cool Cat in the owner’s collection. The NFT is not currently for sale, but the owner is open to offers.

It doesn’t get much rarer than #4695, the only Cool Cat to feature the golden “Lucky” face, hat, and shirt. Looking like the popular Japanese good luck figure, Maneki-Neko, this NFT is distinctive for its bright red background and the totally unique Cat. Selling early in the project’s life, this NFT is only going up in price, with the prolific NFT trader-owner open to hearing offers from prospective buyers.

Another TV-headed Cat is #2157, which sold for well over $300,000 in September 2021. The NFT gains some value from its bronze “Deep Sea” shirt but sees most of its rarity come from the “No Signal” image displayed on the screen. Being just one of nineteen Cats to feature the TV screen image, the Cat’s intrinsic scarcity gives it an edge over similar NFTs.

The NFT is owned by the wallet MR_CC_Vault, a collection that features dozens of other Cool Cats.

Perhaps the angriest (and meanest!) looking Cool Cat in the collection, #5280, is a devilish NFT that fired up one buyer willing to pay nearly $350,000 to call it their own. Like the “Lucky Cat” #4695, this NFT is one of a kind, being the only Cool Cat to feature the “Demon” face, hat, and shirt.

The Cat currently sits in the collection of avid NFT collector sighduck, who has over 1000 assets in their collection, some of which are airdrops from owning a Cool Cat.

A beautiful mish-mash of attributes, #8624 is a rainbow-unicorn, afro-haired astronaut cat rocking some squad shades. While not an obvious niche, this NFT was just what one buyer was looking for and was willing to pay over $360,000 for the privilege of owning it.

The token is listed for sale by the owner FriendlyDegen for 199Ξ, currently around $860,000 at the time of writing. With the token being originally minted for just $350, the token has appreciated in value enormously.

Another TV-head cat, this time in the shade of white, an attribute only 70 other Cool Cat NFTs possess. Like Cool Cat #2157, this NFT’s rarity comes from its “No Signal” face, a property shared by only another 18 Cats. As well as its rare head, the cat is “Exotic 1” in class and sports a green sweater with a gold chain.

Like most of the Cats, this one’s not currently for sale, but the owner is willing to hear some offers on the NFT’s OpenSea page.

Despite being one of the earlier sales in this list, the sale of #3330 still ranks just below the top spot, selling for just shy of half a million dollars.

The Cat’s value derives from its truly unique “Robot” face, hat, and shirt. As the only NFT with these attributes, #3330 is as scarce an asset as they come in the Cool Cat ecosystem. While it’s not the only stylistically curated NFT in the collection, the robot aesthetic is particularly appealing to digital generations, perhaps adding to its value.

The only “Special Zombie” in the collection, this Cool Cat has seen better days. Brain exposed, missing an ear, and shirt bloodied and ripped, #1490 taps into our fascination with everything zombie. It is currently the most expensive Cool Cat NFT to date, with its Zombie aesthetic appealing to a broad audience.

Last selling for $1.41 million, the NFT has come to represent just how valuable Cool Cats have become. Owner, dontbotherme, has the NFT listed for $3.69 million but is also open to offers.

With the Cool Cats project gathering momentum, it may well break more records before long.

In this article:COOL CATS, MOST EXPENSIVE, nft