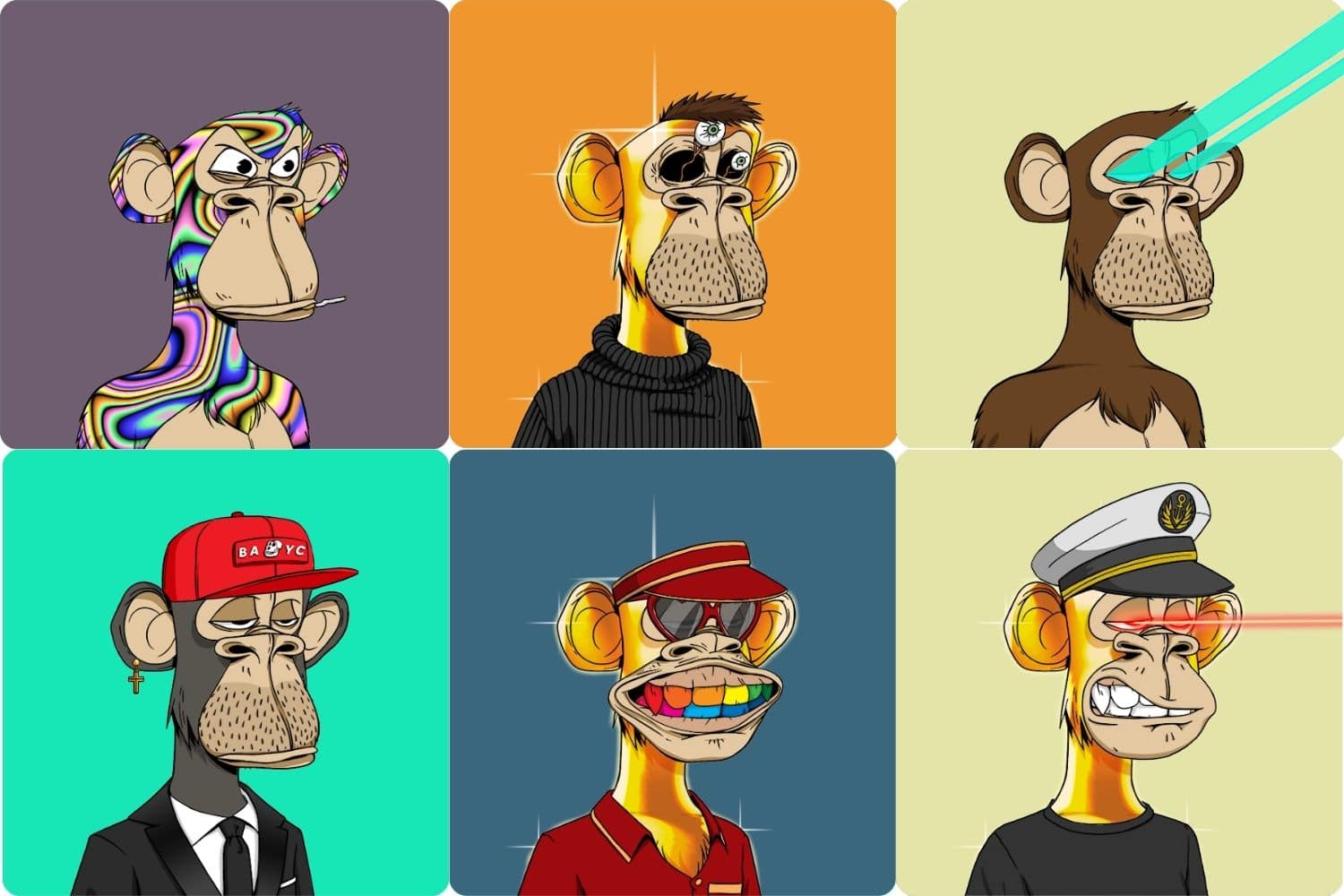 Launching on April 23, 2021, the Bored Ape Yacht Club is one of the world’s most well-known non-fungible token collections. The Bored Ape collection consists of 10,000 unique ape profile pictures generated by an advanced algorithm and leverages the Ethereum blockchain.

Now almost a year on from launch, the Bored Ape Yacht Club has become big business with tokens regularly selling for more than a million dollars. With celebrities and sports stars all getting in on the action too, these tokens are in demand. Renewed interest in the collection comes from the Bored Ape Kennel Club and the Mutant Ape Yacht Club which integrate with the original collection to generate new, unique tokens.

Sorare is a fantasy football game that allows users to buy, sell, and trade digital cards representing real-life footballers. Sorare card NFT packs can be purchased using Sorare’s in-game currency, which can be bought with real-world money. Sorare cards can also be traded on third-party marketplaces such as Ethereum blockchain. Sorare’s pricing model is based on the value of the player’s card, as well as the team they are playing for. Sorare’s top-priced cards include Lionel Messi, Cristiano Ronaldo, Neymar, and Kylian Mbappe. With Unique Cristiano Ronaldo card NFT on the Sorare Platform was sold for a Whooping $289,920 Dollars USD. Sorare is one of the first companies to launch an NFT game based on a major sport.

To better understand the phenomenon, here then are the Top 20 Most Expensive Bored Ape Yacht Club NFTs so far.

Only selling three times so far, Bored Ape #23 just appreciated in value over 173% since its last sale. Selling for nearly $900,000 in January 2022, this Ape is made particularly expensive for its psychedelic, “trippy” fur. With only 77 out of the 10,000 Apes featuring this fur, the ape attracted the attention of the 3D artist, Mus1tieVault who now has 3 apes within his collection, including a mutant.

Selling for just shy of a million dollars, Bored Ape #8580 traded hands back in the height of NFT mania in the summer of 2021. The Ape features a gold stud earring, fetching holographic specs, and a rare, multi-colored spinner hat that is shared by less than 200 of the other tokens in the collection.

Making Bored Ape #8580 particularly desirable is his fetching black suit. Black suits are the rarest of the clothing traits within the NFT collection with only 42 having the property.

Laser-eyes make everything cool, and in the case of Bored Ape 7076, goes particularly well with their other rare traits.

The blue beam trait here is the rarest going in the collection with only 49 Apes sporting it. Combine this with 7076’s blue dress and cheetah fur and you’ve got yourself a recipe for one rare token.

Selling recently, this token is one of the newest arrivals to this list, previously selling for just a single Ethereum in May 2021.

The first robot ape on the list, #9452 has the iconic crypto red laser eyes trait in addition to a spacesuit, raising its value significantly.

Selling last in December 2021, the token has only been sold once in its history, making the owner a significant profit from their initial investment.

Aside from the rare MIB clothing, what makes this Ape so expensive is its Cross Earring and BAYC Red Hat which are shared by only 149 and 119 Apes respectively.

Appealing to fans of the undead, Bored Ape #1401 is the first Ape on our list to feature the zombie fur trait. This fur gives #1401 a green and rotting appearance, maybe a little at odds with his diamond grin and black suit.

The diamond grin especially gives this token the edge in value worth around $1.2 million since its last sale.

Nothing is more precious than gold, except perhaps a solid gold Bored Ape. Featuring the already rare faux hawk, this Ape gets its more than $1.3 million worth of value from being one of just 46 “solid gold” tokens in the collection.

Purchased the crypto and NFT entrepreneur, Jason Falovitch the token is in good hands and sits amongst his hundreds of other collectibles.

Selling for an iconic 420 Ethereum in January 2022, Bored Ape #6694 is another with the rarest eyes going, blue beams.

While the Ape does share some other rare traits, it is perhaps the uniquely stylish combination the algorithm has put together that makes this token so appealing. It did to the unnamed wallet that purchased it anyway, stashing it away with the more than 400 other tokens they have within their collection.

Cyborg eyes and robot fur give this Ape a particularly menacing look and is the first on this list to only feature 4 traits, something rare in itself.

The token was last sold in the Autumn of 2021 to the renowned NFT collector, MachiBigBrother who now has more than a whopping 3000 NFTs in his wallet. Surprisingly, despite being worth around $1.6 million, this isn’t the most valuable!

What makes Bored Ape #8877, apart from its blue beam eyes, is its simplicity. The Ape has the relatively common dark brown fur trait, shared by 1352 tokens within the collection, and the cool-looking, but, again, common unshaven mouth property.

Like Ape #6694, the sum appears to be greater than the parts here, with the total effect appealing to the buyer MadCam enough to spend 425 Ethereum on it.

The most valuable purchase in the wallet of MachiBigBrother is Ape #3562. This token is clad in the rare black suit as well as the black flipped BAYC that only 231 other tokens have and the eery zombie eyes.

The token sold right at the end of 2021 and is now open to offers.

Appreciating in value by a whopping 160% since its last sale, Bored Ape #9361 can be only be described as a hodgepodge of traits. Algorithmically generated, the result here is a trippy, unshaven cyborg that, for some reason, is blowing bubbles.

The unshaven bubbles traits is particularly rare here, shared by only 0.65% of the collection. The token was purchased by collector Formosa who now has more than 750 NFTs in their wallet, including Azukis, mutant apes, and Cryptopunks before transferring it on to a vault.

The saddest Ape on this list is the blubbering mess that is #3001. This broken-hearted Ape is wearing a suitably glum black t-shirt shared by only 3% of the collection, and a sad unshaven face.

While none of these traits are considered ultra-rare, their combined effect has resulted in a token worth 500 Ethereum, selling to none other than Justin Bieber in January 2022.

While the Dagger in Mouth trait is a rare property in the collection, the unshaven dagger in mouth makes Ape #8135 even rarer. With only the Bored Unshaven Pizza mouth attribute edging it in terms of rareness, only 28 Apes have this trait.

Combined with the rarest hat going, the Trippy Captain’s Hat, the hip hop clothing, and the hyptonized stare and the buyer, MetaLink Labs has an ultra-rare token worth almost $2 million.

Selling 6 times in its history Bored Ape #1837 is, perhaps, the weirdest token in this list. Wearing a semi-rare turtleneck sweater with the “Crazy” eyes trait, this solid gold Ape sold to an anonymous buyer through the crypto-company MoonPay.

Though unconfirmed, a well-known NFT collector, Deepak.eth has said on Twitter that it was none other than Elon Musk that made the purchase.

Looking like a solid gold McDonald’s worker, this Ape’s value is boosted by its gold fur, Service clothing, and Multicolored Grin, something only 1% of the collection has.

The token was purchased in September of 2021 by the NFT investor icanfly3 for 600 Ethereum, last selling for 199 only a month before that.

Featuring the first of many traits on this list, Bored Ape #4580 is a Solid Gold Ape wearing 3D Glasses, a leather Biker Vest, Seaman’s Hat, and a dumbfounded expression.

Like some other tokens, these traits in themselves aren’t the rarest but come together to form a really fun-looking avatar. Sold very recently, this token is one of the newest Apes to break into the top list, selling for just 40 Ethereum prior in June 2021.

Selling for a record-breaking £2.7 million at the time, Bored Ape #8585 was for a while the most expensive in the collection. And while it no longer holds the top spot, it still sits comfortably at number three.

Bolstering the value of the token is the Trippy fur and the as yet unseen King’s Crown that is shared by only 77 Apes within the Bored Ape collection.

Red laser eyes, a dashing black tee, and being made of solid gold give Bored Ape #3749 everything it needs to be among the most expensive ever sold in the collection.

Known as “The Captain”, the token is currently sitting at the number two spot and is worth 740 Ethereum. It is owned by The Sandbox metaverse game’s wallet worth over $13 million with the intention of funding development and benefitting the community.

Simplicity winning out once again can be seen with Bored Ape #2087 which sold in September 2021 for an, as yet unbeaten, 769 Ethereum, a sale worth $2.3 million at the time.

This ape has rainbow-colored fur, angry eyes, and a cigarette hanging out of his mouth. With just 4 traits, this is another Ape that does more with less and it seems to have worked selling to IPCollector, an NFT investor with a collection of over 250 tokens.

As the list shows, the collection has attracted a lot of attention from individuals of all different backgrounds, the appeal of the collection is broad. Now becoming part of mainstream culture, the future of the Bored Ape Yacht Club is going to be anything but boring.