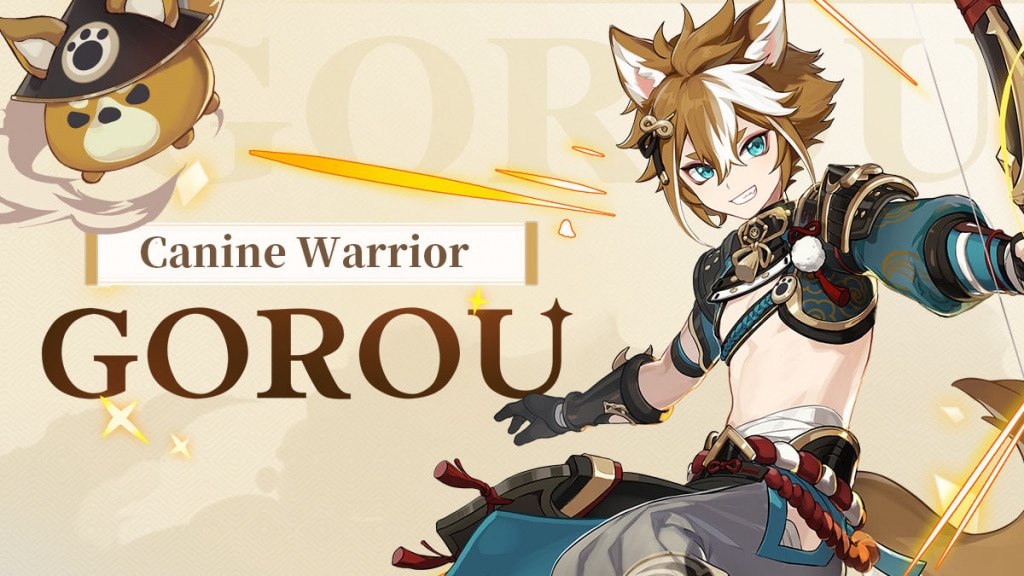 The fearless general of the Watatsumi Island Resistance Gorou is here and brings with him whole new experiences to the world of Tevyat. With his endearing appearance with appealing ears and blissful attire, he is given to be the favorite of many players. By far the earliest character that uses a bow and a Geo element character that focuses on support, using him is sure to bring a new set of fun.

Before jumping onto the best builds for him let’s take a look at what and how his skills work.

With Gorou Geo element becomes the avant-garde in the game with the buffs he is availed of. The more Geo characters in your arsenal the better the buff he gets for his elemental skill Inuzaka All-Round Defense raising a war banner that deals Geo area damage. With one Geo character, you will be granted a defense buff. If you have two Geo characters elevates the strength to withstand interruptions. With three Geo characters buffs the Geo damage.

This skill is his elemental burst. With this skill, he deals Geo damage to the enemies with the 1 Crystal Collapse that is produced every 1.5 seconds. The damage depends on the defense of Gorou. The elemental shards that are produced by the Crystalline reactions are attracted towards the character. This skill generates a field too, that holds the name General’s Glory that grants buffs to the active characters. The magnitude of the buff depends on the number of Geo characters that are there at the party.

Wrapping up these skills it adds up that our cute warrior is brilliant support. Now let us get on to his builds.

The 4-star bow, Favonius Warbow, is the best weapon for Gorou. While using this character priority must be given to the elemental talents. To provide support to his teammates more often, you should use the skill Inuzaka All-Round Defense as frequently as possible. The Favonius Warbow is perfect for it!

As with this bow every crit that Gorou deals will have a 60% chance of generating elemental orbs that will recharge his energy in no time allowing you to use his elemental skill as much as possible.

The Sacrificial Bow is also a very good alternative if you don’t have access to the Favonius Warbow. The chance that the bow grants of resetting the cooldown of Gorou’s elemental skill as he deals damage to enemies with it proves to be effective. However, the chances of the cooldown being reset are not that high. So, it is better as an alternative to the Favonius Warbow in the case of Gorou.

This artifact focuses on the increase of defense. As a support Gorou this item will do great with him as this provides defense for him. A two-piece Husk of Opulent Dreams will grant about 30% defense. With four-piece, Gorou is availed of marvelous boosts. It will grant a 54% defense boost and about 24% Geo damage bonus which is heavenly.

This artifact will take the capabilities of Gorou to another level. With four-piece Noblesse Oblige, the whole party will receive a 20% damage boost at the most for 12 seconds as the burst sets off. Whereas a two-piece will grant a 20% damage boost to the burst.

The case with Gorou is the more Geo character the more buffs he will be granted and he does wonders as support. So, it is obvious to party him up with more Geo characters. Keeping him in a party with Arataki Itto and Ningguang is the best that you can opt yourself with. Arataki Itto as the main DPS and Ningguang as sub DPS. Gorou does best when he supports these two. You can also use Albedo as an alternative for Ningguang.