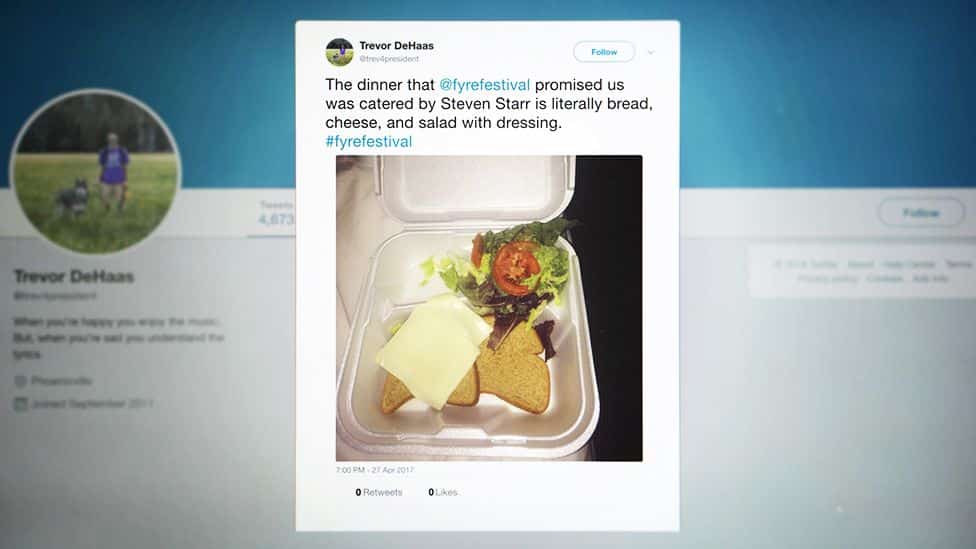 Nearly 4 years ago, a man tweeted a photo of a sad cheese sandwich from Fyre Fest which went viral, and now he’s auctioning the tweet as an NFT for his medical expenses.

The dinner that @fyrefestival promised us was catered by Steven Starr is literally bread, cheese, and salad with dressing. #fyrefestival pic.twitter.com/I8d0UlSNbd— Trevor DeHaas (@trev4president) April 28, 2017

Trevor DeHaas in 2017 was drawn to the Fyre Festival at Bahamian island of Exum which was marketed to be the greatest music party of all time that never happened. Trevor tweeted a photo from the Fyre Festival that went viral, he tweeted a photo of a sad cheese sandwich that looked like two lifeless cheese slices laying on top of some whole bread with a side salad and it was presented in a Styrofoam container. The tweet has described the whole Fyre Fest experience in one picture.

Fyre Fest was advertised as a luxury music festival in the Bahamian island of Exum, which included performances by some big star, high level catering, Jet Ski and yacht will be used to transportation. Guest paid up to 12 grand to attend the event and among the celebrities, the popular American model, Kendall Jenner also promoted the event by paying $250,000.

The event didn’t go as it was promised and social media post from the attendees of Fyre Fest like Trevor showed pictures of a poorly organized, unsatisfactory event that was no nowhere near to what was advertised to the public, and soon after the event, the lawsuits began. The  organizer of Fyre Fest, Billy McFarland was pleaded guilty for fraud charges in 2018 and he was sentenced to prison for six years.

Now, Trevor DeHaas, the infamous Fyre Fest attendee wants to sell his tweet as NFT (non-fungible token) to cope with the medical expenses for his daily dialysis and kidney transplant. Recently the CEO of twitter, Jack Dorsey, sold his very first tweet as NFT for a total of 2.9 million USD in an online auction run by a blockchain social media network, Cent. Jack first tweet was posted on March 21, 2006, which says, “just setting up my twttr”.

Trevor is now inspired by the success of Dorsey’s sale and he it’s clear that he don’t want to miss the opportunity, so he is deciding to sell his own one too. Trevor jokes about that how a photo taken from his iPhone 6 using flash is the most viral or valuable image he’s taken to date. But unlike Jack Dorsey, who sold his first tweet for no reason, DeHaas motive is noble because he says that the sale money of the tweet will help him to cover his medical expenses related for a kidney transplant.

DeHaas is battling with IgA nephropathy, or Berger’s disease for decades, and the expenses of weekly nephrologist visits, weekly blood tests, and daily dialysis is increasing as time passes, not to mention he also has to pay for the transplant evaluations. He is currently searching for a living/deceased organ donors and the NFT sale will also help him cover the expenses of the donor.

NFT is a digital collectible item, stands for non-fungible token. A fungible token is like currency such as dollar or Bitcoin itself which can be duplicated and replicated. Which means that if you have 2 Bitcoins and you give one to your friend, he will posses the same Bitcoin as yours. While for NFT’s, that is not the case as they are individually unique to each other. NFT’s cannot be replicated or duplicated as each NFT’s are unique to each other and have a Token ID that is different from every NFT asset.

If you have something that functionally the same but not a NFT, the item will not count same, a good example will be when a digital creator make a digital video, music, photo and upload it on social media and we can all copy the content because it is not special and has no value but if the creator converts the file into a NFT, digital information will be added to the file and now the content has almost like a certificate of authenticity.

Then the Non-Fungible Token will be listed on the Internet’s financial ledger as a blockchain. The NFT market is very hot now and there is huge amount of money behind digital contents. They are mostly sold in online auctions but NFT owners also sell it directly to the buyer.

Trevor says, considering the hot NFT market and hopefully he will be able to raise enough money for his medical expenses and do not have to rely on GoFundMe to pay. So, now he setting the Tweet on auction and he also mentioned that he will be giving away the copyright and ownership of the tweet with the NFT.

DeHaas is selling his tweet on Flipkick, which is company for musicians and artist where they can monetize their work through the help of Physical NFT. The most interesting part of the that Ja Rule, the co-organizer of Fyre Fest is a partner in Flipkick, and he has sold a logo painting of the Fyre Fest as  an NFT for $122,000. Trevor tells us that FlipKick has helped Ja Rule to sell his item hopefully they will him too, he also mentions that the artist is not directly involved in the auction of the sad cheese sandwich tweet. The estimated value of the Cheese sandwich tweet on Flipkick is $80,000, Trevor is hoping that the sale of NFT tweet will bring him at least $50,000, and he will go towards his current expenses and future transplant expenses. The ownership of the tweet will be delivered to the highest bidder, photo, and copyright included. The online auction for the Fyre Fest chees sandwich tweet is set to end on April 24.