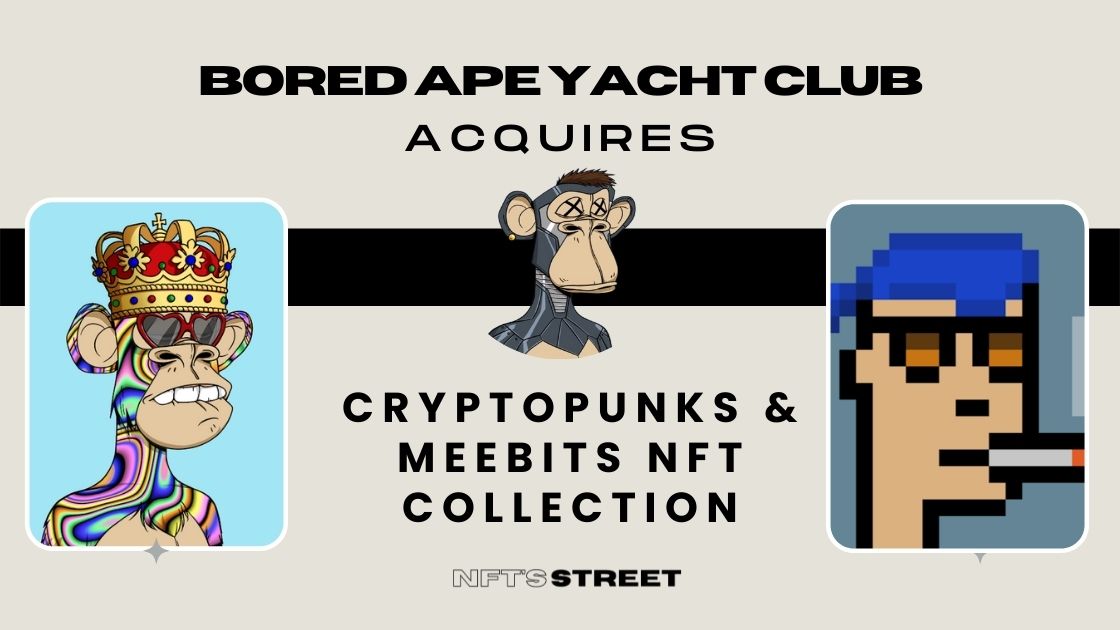 The right to two of the world’s biggest NFT projects has just changed hands in one of the space’s biggest ever acquisitions. Yuga Labs, best known for its Bored Ape Yacht Club (BAYC) collection, has officially bought the intellectual property for Cryptopunks and Meebits from Larva Labs on March 11.

Cryptopunks is one of the most well established NFT collections out, launching the 10,000 tokens in 2017 with some of the most expensive tokens in the world coming from the project. Meebits launched sometime later in May 2021 and also now ranks amongst the most valuable collections in the space.

The sale sees 423 Cryptopunks change hands and 1,711 Meebits. As it stands, the average Cryptopunk selling price is just short of $180,000, with Meebits selling for around $16,000. While details of the acquisition haven’t been released, estimates put the sale at more than $100 million based on the price of the tokens alone.

Greg Solano (AKA Gargamel), Bored Ape co-founder, explained that the decision to buy up Cryptopunks was not immediately a business one and that the long-term plan had not been completely established. With Cryptopunks being such an iconic, visionary project, Yuga Labs see the opportunity for it and Meebits to become an even bigger brand going forward.

Explaining in a blog post (https://mirror.xyz/0xEc9f53fA69682833FBd760C104B5D61aE29221E0/Km81y6Mc3O5LzS0wnrghVIV0HnZgLOd4wsnfcGw3_2I), the Yuga Labs team claims they are sensitive to the different communities of each collection:

“What we don’t plan to do is shoehorn these NFT collections into the “club” mode we’ve developed for BAYC.” Further putting community fears to rest, Yuga Labs added “We’re not in a rush here. We’ll be listening to the community before we decide what comes next.”

The previous owners, Larva Labs, was founded by Matt Hall and John Watksinon who have expressed support for the Yuga Labs stewardship of the projects. Software developers first and foremost, the pair explained that they felt less and less suitable as owners as the years went by and the NFT space evolved.

One of the more exciting aspects of the acquisition is the transference of commercial rights and exclusive licensing to token holders for free. Just as with BAYC and its sibling collection Mutant Ape Yacht Club (MAYC), this gives token holders the right to use their token character’s likeness in commercial ventures such as advertising, animations, music videos, and games.

Wylie Aronow (AKA Gordon Goner), another co-founder of BAYC, explains that just as with BAYC, the future involves figuring out the utility of Cryptopunks and Meebits. This includes streetwear, games, and other related NFT collections.

Whereas every BAYC resale gives Yuga Labs a cut, Larva Labs never implemented the same royalty system. The team intend to keep things the same and not introduce any kind of royalties for Cryptopunks or Meebits. Yuga Labs will, instead, be exploring alternative ways to monetize the collections. The nature of this monetization has not been disclosed however and the team have declined to comment so far. What they have said, however, is that it won’t be like the Bored Ape Yacht Club’s “private membership club” mode.

Looking at the bigger picture, the acquisition is a sign of the NFT space maturing. While still a relatively small company with less than 50 employees, Yuga Labs is a big player when it comes to NFTs and their consolidation of different brands under one umbrella company may appear to legitimize the industry to outside investors.

Until now, NFT collections have largely been private, grassroots enterprises with operations receiving no institutional investment or backing. The idea of large NFT companies buying up other collections and helping the space grow is perhaps a welcome sign of a bright NFT future.

Yuga Labs have explained that, ultimately, at this point it’s not all about money either. The founders have explained that they believe NFTs offer the opportunity for great utility and the development of close knit communities as seen with smaller NFT projects. For Yuga Labs, this is just the beginning, with NFTs on the very frontier of the internet.