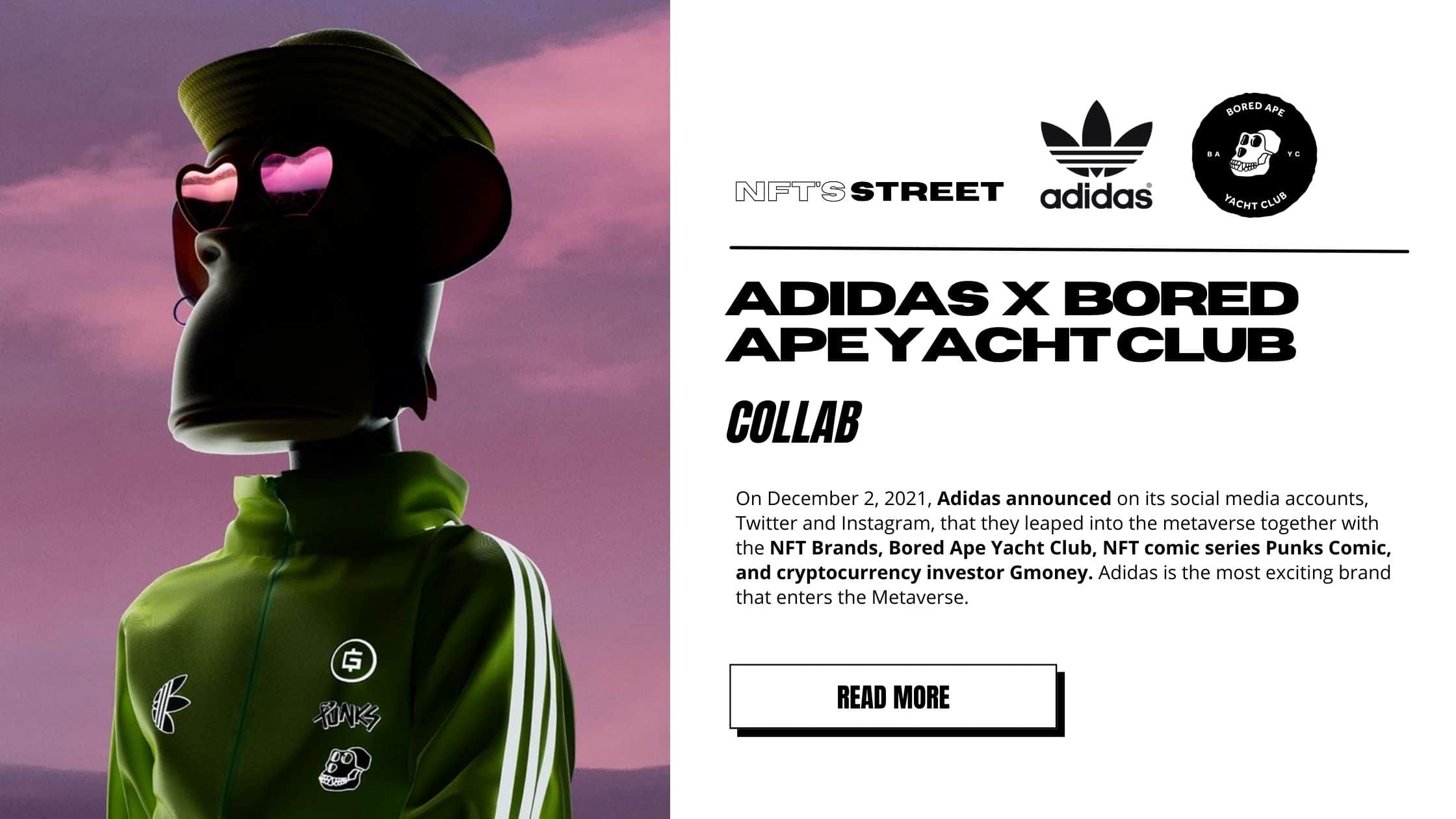 On December 2, 2021, Adidas announced on its social media accounts, Twitter and Instagram, that they leaped into the metaverse together with the NFT Brands, Bored Ape Yacht Club, NFT comic series Punks Comic, and cryptocurrency investor Gmoney. Adidas is the most exciting brand that enters the Metaverse.

Metaverse is an emerging vision of the future of the internet where users own NFT Collectibles in the virtual space. The NFT Collectibles that are owned by users will be used to interact in shared 3D worlds.

Entering metaverse is the new trend and a competitive strategy in business. That’s why Adidas joins in hand with Bored Ape Yacht Club and other NFT Brands to dip its toes into the virtual space.

Bored Ape Yacht Club was founded by Yuga Labs in April 2021. It is a digital collection of 10,000 unique and prominent Bored Ape NFTs that live on the blockchain of the cryptocurrency Ethereum.

The ownership of a Bored Ape NFT doubles as an exclusive membership pass for the activities of the community.

Each of the NFT in Bored Ape Yacht Club is generated differently according to its purpose. The differences in expressions and apparel make each of these NFT unique.

According to NFT Marketplace OpenSea, Adidas purchased a character Bored Ape Yacht Club NFT #8774, in September, for 46 ether, or around $156,000.

This character that they purchased will be turned into a metaverse character and will be named Indigo Herz.

They made a teaser in their social media accounts to show this collaboration with NFT Brands.

Today we leap Into The Metaverse with @BoredApeYC, @gmoneyNFT & @punkscomic.

There is also a link added that leads to their Metaverse website which shows a video of the three NFT Brands leading Adidas into the Metaverse.

Upon the announcement of Adidas entering the metaverse, they also changed their profile picture on their Twitter and Instagram accounts. The profile picture shows a signature Bored Ape cartoon wearing yellow Adidas Originals clothing with the classic three-stripe design and also displays trademarks of Pixel Vault’s Punks Comic and Gmoney.

The character in the profile picture also features a blue-skinned ape with a fisherman’s hat, heart-shaped sunglasses, a gold hoop for earrings, and a “bored” look on its face.

A week before entering into a metaverse, Adidas revealed that it acquired space in The Sandbox, a virtual gaming world. Also, on November 24, they made an announcement about their partnership with Coinbase, a cryptocurrency exchange platform.

Aside from the teasers that have been shared with their fans, there are still other official details that are yet to be shared about the entrance of Adidas into Metaverse.

Nike, the main competitor of Adidas, also revealed that they are focused on metaverse. Nike published a post about “Nikeland” on November 18. It means that it has established itself in the virtual world of Roblox.

As the metaverse takes shape, user-owned NFT assets like profile pictures are designed to become a key building block.

Metaverse is today’s trend. There will be more companies that will announce their entrance into the metaverse for a virtual space.

Grumpy Pandaz NFT | 8,888 Pandaz NFT’s That Live in the Metaverse

Grumpy Pandaz is a Collection of 8,888 Adorable Grumpy-looking Pandaz NFT that live in the Metaverse. Distressed by the real world, they chose to move to the Metaverse to experience a better world and they just love it there.

With a community that’s massively growing, and a roadmap that’s has a strong vision for the future, it’s one of the most inspiring NFT projects in development. They have a solid plan for charity, as they are going to invest over $150,000+ to build Schools and Water Wells in Africa in order to support the less fortunate.

With a dream of changing the world, Grumpy Pandaz is a Thriving NFT project with lots of scope and potential.

Get Involved with Grumpy Pandaz by Joining their Discord Channel –https://discord.gg/RseDc7x5